On Saturday, Kendall Jenner and boyfriend Devin Booker went to dinner at Catch Steak in West Hollywood together, looking casual yet fashionable as they walked past photographers. Jenner was in a black crop top with a plunging neckline that displayed her abs. She wore them with a pair of black tight straight-legged leather pants, pointed pink heels, and a small embroidered purse over one shoulder. She left her hair down over her shoulders, and went with simple makeup with a nude lip. 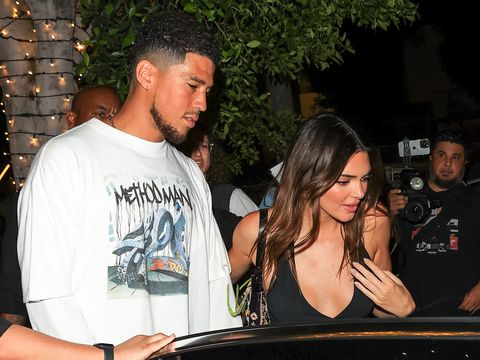 Booker was wearing wide-legged denim jeans with a white graphic sweatshirt and a pair of sneakers. 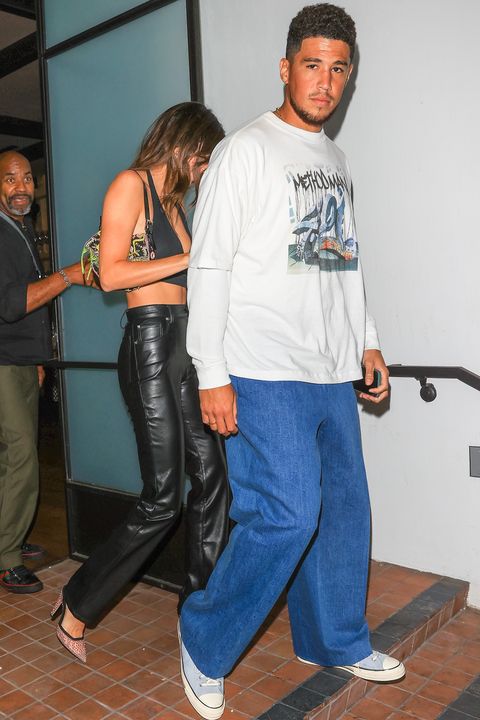 The couple recently had a brief split that was first reported in June. It was soon rumored they’d begun seeing each other once again. Jenner then posted a shot of her boyfriend on her Instagram Stories, seemingly confirming the whispers. In the clip, Booker was throwing an ax at a tree while the couple were on a vacation together.

“She and Devin are fully back together,” an insider close to them told E! News. “They worked out their issues and decided they want to move forward and be together.”

Another source saw them together in the Hamptons celebrating the Fourth of July. Someone at the event said Jenner held “on to Devin’s arm the majority of the night,” adding that they “looked really cute.”

They both have very busy schedules, which can make navigating a relationship difficult, especially when because they’re high profile celebrities. Booker has his obligations as a member of the NBA’s Phoenix Suns, and Jenner is a star of Hulu’s The Kardashians as well her work as a booked and busy model. She recently said in a new interview with Vogue that she has been dealing with anxiety and finding ways to cope.

“I have struggled with anxiety for years and it can have good and bad days,” she explained. “If I need to wind down, I really make a point to take 15 minutes to meditate to settle my anxiety so I can get a good night’s rest.”