Best New Artist nominee and pre-show performer Dove Cameron came serving a particularly unique look at tonight’s MTV VMA award ceremony in Newark, New Jersey. The “Boyfriend” and “Breakfast” singer paired a strapless floral gown with three belts—one around her neck, another at her bust, and a third at her waist. She wore her brown hair in twin braids. 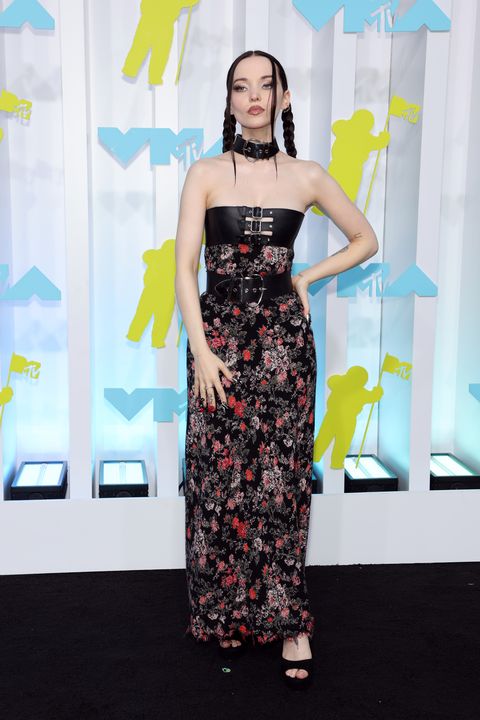 Cameron’s appearance at the MTV VMAs comes days after she released the music video for “Breakfast,” exploring a gender-flipped world in the wake of Roe v. Wade’s overturn. She reflected on her Best New Artist nomination in an interview with Cosmopolitan released over the weekend—and how much it means for her following the viral success of “Boyfriend.”

“I remember waking up to a bunch of texts like, ‘Congrats on the nomination!’ And I had absolutely no idea. That is really wonderful, something acknowledging work I’ve done,” she said. “I’m always, like, two feet in front of me, folding laundry writing in 100 journals, and trying to just get through my day, that the awareness that other people are perceiving me is fairly low. And I know that sounds funny for someone whose job is to make things and then put them out into the world, but I think because I’m consumed with making the things, it’s like boiling 100 pots. When someone’s like, ‘Oh, yeah, I’ve seen your thing.’ I’m always like, ‘What? Oh, right. Yes, there are cameras when we filmed that show.’ And so I was really shocked. I think I probably cried, and I called my mom and I was like, ‘Mom, you don’t understand, this is the biggest deal.’ I’m very moved.”

“‘Boyfriend’ was such a surprise for me, the way it unfolded, and I didn’t expect anyone to ever hear it, let alone have it be on mainstream radio or make sort of any sort of mainstream impact,” she continued. “The fact that it’s a queer song, and I’m probably nominated this year based on that queer song, is just all the more meaningful because I think it connects us all, and I feel like I exist solely for for human connection. So it’s very exciting. I’m still trying to wrap my head around it.”